This summer I am revising a novel. It isn’t the first time. Or the second. In fact, I’ve lost count of what revision round this is. The 4th? The 7th? The 17th? All I know is that the manuscript–the complete first full draft–was produced in 2015. And I’ve been revising it off and on ever since.

Sometimes I stepped away for years. And in those years, wrote entirely new books. Sometimes I took the manuscript to workshops so it could be torn apart and put back together. Sometimes I didn’t write at all. There were days, weeks, months when I just existed.

But the story always called to me. I knew I hadn’t put it away forever. I knew someday I would come back. And so I did, cautiously. For the book had been made and unmade so many times that I could hardly see its original shape beneath the cuts, the rewrites, the false starts. What was this thing that I labored to create? What was its soul? Where was its soul?

I told myself I had good reasons for not writing. A different job, a different house. The ongoing challenges of the pandemic. And not least of all, that I had lost my writing desk. 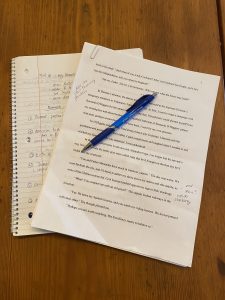 I didn’t need the desk to write. I’d written in plenty of odd places, at odd times. The sweltering porch of a bed and breakfast on Maryland’s Eastern Shore. On an Amtrak train bound for New York. A morning in the dark predawn at a near-empty diner. Starbucks. My dining room table.

But those weren’t at my desk. Those weren’t in the space that was my own, that I could sit at and let the ideas come (or not) and type them and fight with them and chase the sparks that would propel me forward. My desk was where things had happened: three novels, countless articles, hours and hours of notes and staring and scribbling.

Without the desk, I was anchorless. Or so I told myself. How could I recover the essence of a novel when I literally could not get back to the place where I had written it? How could I find the center of something when the path to it was gone?

I moped. I mourned. I halfheartedly browsed for another desk, looking at secondhand furniture sites and bougie boutiques. But I didn’t want someone else’s desk. And I didn’t want a new one. The solution became apparent: I would make one for myself. I’d find something that spoke to me. Strip it of its former character. Claim is as my own.

And so I did. The battered thing I found had seen hard use. It cost me next to nothing; snow flurries spit from the sky as a kind warehouse employee helped load it into my car. But it had character. Untapped potential. I brought it home. Cleaned it. Sanded down the damaged veneer, painted it in shades of cream and blue that reminded me of the sea.

It is transformed. It is mine.

And the novel is transforming too. I am giving my heroine not just a voice, but a pulse. A vulnerability.

For art is not about perfection. It is about the mess. The imperfect moments of our lives. Our second guesses. Our failures. Our flashes of clarity. Our glimpses of love. Our courage, our fear.

And so I write, not to divorce my heroine from those things, but to put her into the thick of them. To give her a reason for carrying on. And for me to follow, to go up the stairs, to sit at the desk. To keep the story going.

On Being Creative When Life Feels Awful