February 25, 2013 No Comments
During the winter months, I have to mostly content myself with dreaming of Western adventures. Until my next travels towards the sunset, I have been working on a couple of articles about cool frontier stuff like ghost towns and the Oregon Trail. I’ve dabbled in learning to ride English, and watched a whole lot of Downton Abbey. As a finale for Season 3, I decided to indulge in a Downton Abbey tribute dinner, inspired by Canadian food historian Pamela Foster’s totally awesome blog, Downton Abbey Cooks.

For my menu, I kept things simple. I did four courses, and had ambitiously selected a wine pairing for each. From watching another PBS show, I’d learned that German wines were apparently quite the thing in the early 1900s. We dutifully hunted up a Reisling to serve with dessert, since it seemed that Carson would be hanging on to tradition rather than embracing cocktails and modernity. The rest of the menu is as follows:

Asparagus Salad with Champagne-Saffron Vinaigrette – (we had the sancerre again)

Apple Charlotte – with the aforementioned Reisling, or the option of boutique, locally sourced coffee 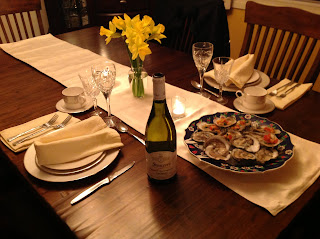 First, I was in love with the names of the dishes alone. Simply saying “oysters a la Russe” aloud sent little shivers down my spine. Explaining that I was making a “champagne-saffron vinaigrette” to my mother, who was duly impressed, made the weekend feel 10 times more elegant, even as I went off to the supermarket that morning in sneakers and sweats to pick up my ingredients.

Secondly, although I had chosen dishes that were relatively simple and didn’t require a lot of hands-on time, and although I was only cooking for myself and my husband, doing a multi-course meal is exhausting. I cannot imagine how Mrs. Patmore would have cooked for an entire family, and their guests (and probably a lot of the servants) night after night, without any electric appliances and no modern refrigeration. By the time dinner was actually on the table, I was feeling a bit done in.  I still went upstairs and put on a fancy dress, because at Downton (even make-believe Downton), dressing for dinner is the right thing to do.

As far as the food itself, it turned out far better than I would have imagined. The oysters were a combination of Outer Banks and Chesapeake Bay oysters, and the rich flavors of the tomatoes and pepper made a very savory combination. Although the Sancerre was just a touch sweet, overall it went fairly well with the dish. And since the Loire Valley has been a wine-producing region for ages, we felt it was in the spirit of Downton to go with a French vintage for this course.

We really should have had another wine for the asparagus salad, but we stuck with the Sancerre as there was still plenty in the bottle. The saffron flavor was very subtle, but the color combinations of this dish made it quite pretty to look at. It may also have been the healthiest thing on the menu!

Now, the chicken. Quite simply, this is the best roast chicken recipe I’ve seen, hands down. The meat came out very moist and flavorful, and perfectly cooked after an hour and 45 minutes. I put herbs and butter AND lemon slices on and inside the chicken, and boy, it did the trick. I realize that serving a red, American vintage was a bit of an unusual choice for poultry, but there was a lot of white wine being served at other points in the meal, and I wanted something a bit earthy. Secondly, the Philip Carter winery is old, like 1762 old. In fact, the wines were awarded a Royal Society medal in the late 1700s. Maybe its a bit of a stretch that the Downton cellars would have included a New World vintage, but not impossible. And if they did, I suppose there are worse options than a Virginia-grown blend of Cabernet Franc, Petit Verdot, Cabernet Sauvignon, and Merlot.

The apple charlotte was also a pleasant surprise. This was my first go-round making this dessert, and I decided to fancy up the recipe a bit. Apparently cinnamon was not used widely around the WWI era, but I threw in a few dashes of nutmeg to liven things up.

Preheat oven to 350 degrees F. Combine the nutmeg and white sugar in a bowl. Stir the sugar mixture and the apples together. Place a layer of buttered bread in the bottom of a pie plate, buttered side down. You may need to use partial slices of bread to cover the plate completely. Add two layers of apple slices. Sprinkle a portion of the brown sugar on top. Add a layer of buttered bread, and more apple slices, covering the bread completely. Sprinkle again with brown sugar. Bake for 45 minutes. Allow to cool slightly.

Meanwhile, beat the heavy cream until stiff peaks form. Top individual servings of the apple charlotte with freshly whipped cream – and a little nutmeg, if desired. Serve at once.

The end result? I’m not quitting my day job for culinary school anytime soon, but it was a tremendously fun experiment. Maybe I’ll kick Season 4 off with a special “downstairs” menu in honor of the folks who really keep Downton going.