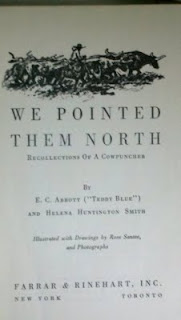 Teddy Blue Abbot is my favorite cowboy. He’s been dead for nearly a century, but that didn’t stop him from making me laugh, making me think, or even making me a little envious. Teddy Blue (born Edward Charles Abbot in Norfolk, England) emigrated with his family to America as a child, had a hardscrabble life on the Nebraska plains, and ran off to play cowboy as soon as he was able. Late in life, with the help of a New York writer and aspiring novelist named Helena Huntington Smith, he published a set a memoirs that I was lucky enough to discover at the Library of Congress.

Teddy Blue is a great storyteller. Like other spinners of Western yarns,his accounts do take a turn to the bombastic on occasion. But unlike others whose writing mushes into an ooze of stock characters and heroics, the accounts barely distinguishable, Teddy Blue stands with distinction. Reading his book gave me the uncanny sense that I was hearing him talk. Helena Smith sensed this as well. In her introduction, she writes, “My part was to keep out of the way and not mess it up by being literary.”

He has an ear for anecdotes, as well. An example:

I heard a story once about a schoolteacher who asked one of these old Texas cow dogs to tell her about how he punched cows on the trail. She said, “Oh Mister So-and-So, didn’t the boys used to have a lot of fun riding their ponies?”

He said, “Madam, there wasn’t any boys or ponies. They was all horses and men.”

Tomorrow, I am heading out to Nevada to go on my own cattle drive. As Teddy’s anecdote points out, events are different once they are experienced from the inside. I can’t travel back to those days of the 1870s. But I can get a glimpse of it. Maybe.

Why Your Life Needs Rituals